On this day, i got another example of the godeau effect,  when i decoded that the extra 8 mentioned above denoted the mysterious 8th chakra which should have 8 spokes –  but which chakra is it? …the spleen or the sacral ?  For now it must remain a moot point, but this can wait for another day. The godeau formula worked out as follows: elapsed time since the first breakthrough was 16 years 8 months (6088 days). There were three 8’s in that number-pyramid to be accounted for,  way back in 1998, the throat chakra had accounted for 2 of them  (16 petals)  and now the 3rd eight was decoded to my satisfaction, ie it represented the 8th chakra either the spleen or the sacral – as yet to be determined…..

On this day, 2.03 years after decode-2, i worked out the ALFOBETIC theory of evolution [version 1.0] including self-9 residing inside  atom-9 [as a potentially part of dim-9] but actually self-conscious only much lower down somewhere on dimension 5. 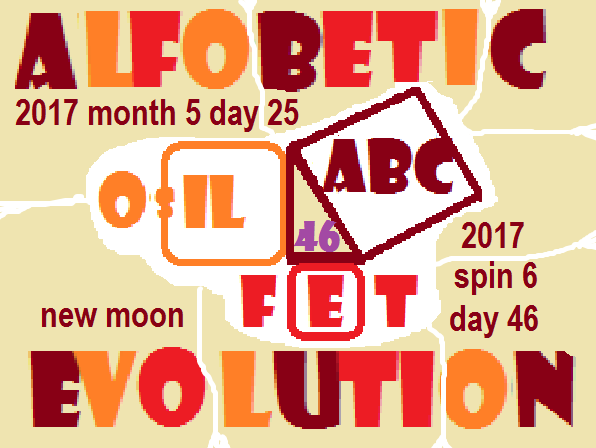 i was keen to check out the formula. First i calculated the elapsed time in days as 8159 counting from 4-jan-95, but that didn’t easily compute so i recalculated the duration as 22 years 4 months and 3 days – that is , since i started work on my first pyramid.

And that did compute as follows… in the alfobetic theory our core essence is called 95z and it starts its human evolution on course human-school-21-22  analagous to stone-course-22 of giza and as part of our human phase of evolution, we are invited to navigate our way through the next 18 levels where each course is further subdivided into 28 steps.

The correlation of the “43” is very obvious when i divulge that 95z also relates both to dimension 43 in the pythagorean notation and also our familiar 3rd dimension with it focus on class 4 and dim 4 where  d4  denotes dimension 4 on each gradient.

On this day i updated the name to include D instead of T to reflect the great importance of D, our devic angel and supervisor who considers us to be its protege stumbling along through many incarnations.

From the myth of Persephone and the pomegranate, i was able to work out the significance of 4 and 6, denoting the divisions of mental and astral IQ’s and also from the significance of our being in the 4th round  with its 5th root race, i connected the extra 4 calibrations of stone-courses / sub-planes of dimensions / strands / subgrades of the atom strings as follows:

see up-the-ladder-of evolution and  lesson-3-4 on the main menu.

The godeau formula was easy to work out in this case: the 4 selves making human evolution happen are “native” to  dimensions 8,6 and 9 see table below, with the “1”  in the middle being considered as the oneness and teamwork of this star cast of 4 selves.

On this day i upgraded the theory to version 3.0 to include the sequence 8d69 = 8669 = “8169”   which denotes the core dimension of each of the 4 selves involved. In the following table, the 2nd digit of the pair denotes the typical dimension of  aspiration.

For a more comprehensive notation see overview of a-z notation

self-76  = highest self aka collective elder planetary selves
self-d4  = solar angel aka angel of the Presence aka guardian / supervisor of the 5 vehicles of the human-self
self-74 = higher self aka our collective elder planetary selves
self-73 = our human-self aka  our core essence aka “my-real-self” residing on z40, typically focused somewhere along the spectrum : z3237…….z34z38

This paragraph  {…} is now superceded, it remains only  for historical context and can be ignored.
{…
It was a small step for me to equate 8d69 with “8169”  where 1 represents the oneness of our designated angelic deva, and 869 represents the 3 other selves in the drama, so i didn’t need to stretch creativity to see how the formula worked on this one.

The name change of the theory was prompted by the glaring omission of the etheric realm = N. This is the master-etheric-being that creates its replica and robot called by us our organism – so called because we can consider it to be naked without its human organism constructed from the 3 grades: solid / liquid / gas. So N had to be incorporated into the new name. The obvious choice was alfonumeric which meant  i had to incorporate 4 new letters and jettison 2 of my favorites.

N: the trigger for this rename in the first place and our first and closest interface with the super-physical worlds.

M for the lowest sector of the astral.

R for the quality of matter, so much of it robotic and sub-divided into 4 types:.

R1 =  for the quality of matter, so much of it robotic. R1 = primary matter without conciousness but potentially R2.

I wasn’t happy about having to remove my favorite D denoting both our angelic presence and our higher spiritual self.
However i consoled myself in that D is conspicuous by its absence and it still plays the most central role in the pictorial format.

I wasn’t so happy to remove B, but B retains a significant presence in the diagram as it should do. 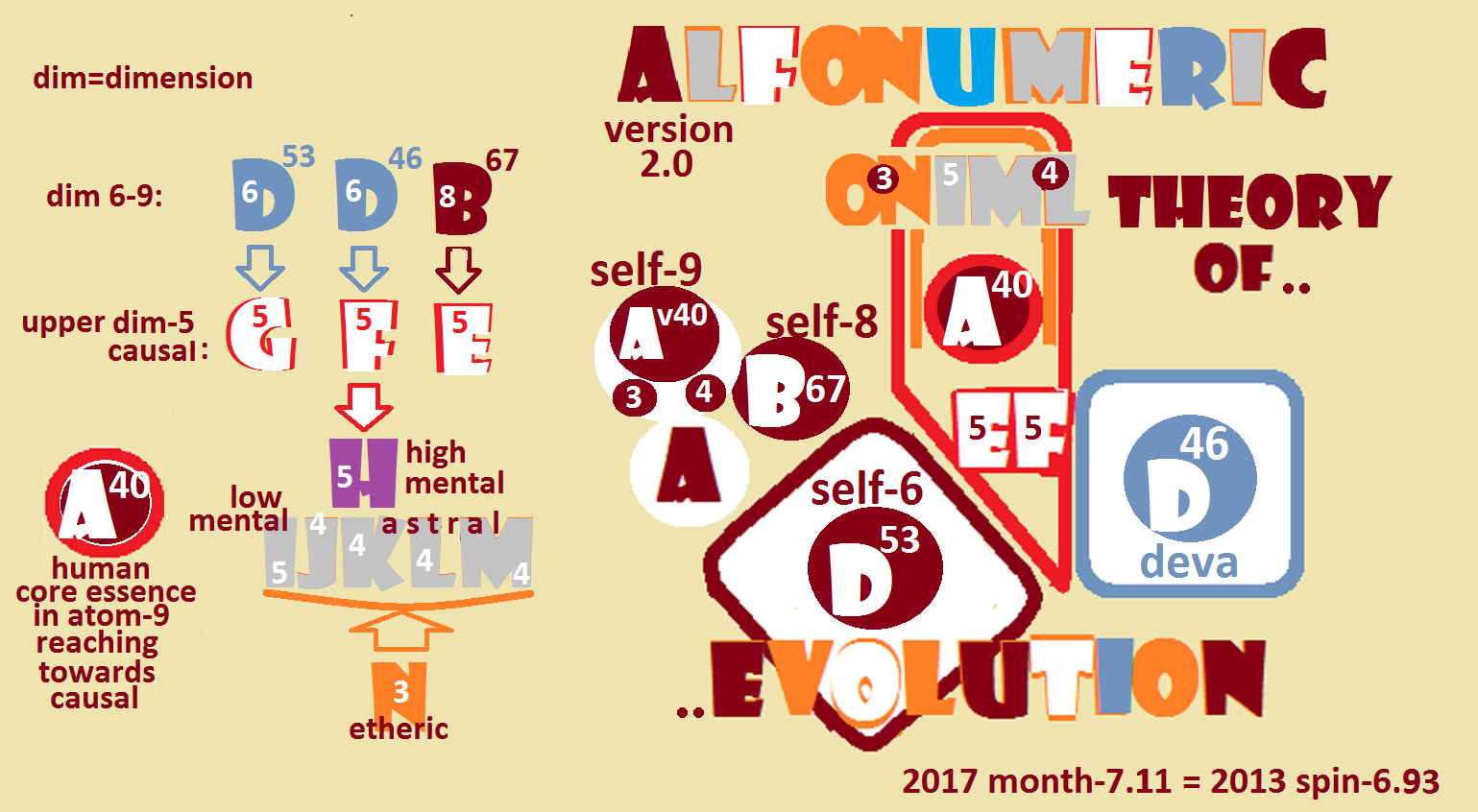 This paragraph  {…} is now superceded, it remains only  for historical context and can be ignored.
{…

SELF-D46 = angelic presence occupied on level z46 when dealing with us – its human protege.

SELF-B67 = our highest self reaching upwards  to the solar levels of z67 while reaching downwards  to our higher self on z56.
…}
The new notation springs from decode-8, see below.

So, now it remains to check out the operation of the godeau effect.

Looking at the date we see 7-11-17  which is the fundamental ration of the Giza pyramid where its height: side ratio is 7:11

Also we can see that the new name of alfonumeric has 11 characters and we can also see that our human essence A40z  is mostly engrossed on the bottom 7 realms seen on the left hand side of the diagram.

Today the tussle between the sacral and the spleen chakra for the 6-slot has been finally been resolved. Sacral =6 petals and spleen =8.

I found this most surprising because for seveal years, i had been guessed it was the other way around because of 3 reasons

a) the sacral bone has 8 holes in it

b) in Charles W Leadbeater’s book “chakras”, he implies the spleen chakra has 6 petals,

c) the sacral maps to the throat chakra so 8 petals would give an elegant 2:1 ratio.

Ah well, life is full of surprises, but i still need to investigate the  godeau effect to see if we can get come confirmation on this issue.

05:52am Now i’ll look at the elapsed time. Well it’s 6899 days since the decode-3. The sequence of 68 points back to date of the origian pyramid-2 message and suggests that because 6 is  first, it so deserves to be tagged with the sacral chakra which is most of the time the first-choice chakra to be included in the sacred 7.
9 is the number of completion so that’s a plus.

It’s also the 6th day after the last decode so that’s looks like an opportune day to decide the fate of which chakra gets the reserved slot of 6 petals. Also since the job of the spleen is to supply itself and the other 7 chakras with the required cosmic electrical energy and the solar-prana, having 8 petals sure seems to fit in with this scheme of things.

31-aug-17
We can call this a major upgrade ver 4.0. Here the notation for dimensions takes a reshuffle. Previously dim or dimension was taken to be synonymous with planes starting on 3d and running up to 9d the home of the selves on the human branch of evolution.

Now I realize that “dimension” has a dual meaning, as well as the familiar 3d, 4d connotations it can also mean the slice of the dimension that is currently in focus for this time period. Let’s call it inf for the subdimension in focus.

Currently we are more than half way through the 4th round and we could logical expect that we are focussed on mostly the 4th subdimension.
The 3rd round was the round where the lemurians perfected the 3d-body around 13million years ago and they held center until the 4th round when it became the turn of the atlanteans to “perfect” the bottom four grades of the 4d-emotional body. Then around 1 million years ago the indo-europeans appeared on the scene with the mission to perfect the lowest 2 grades of the 5d-body, and that is pretty much where we are stuck today [2018]. Atlanteans and indo-euros both working on the twin-process in the emotional and mental bodies.

With the the help of the internet since 1999, we are doing our best to shake off the mesmerism of the mockin’ stream media and to start using our use our capacity for analytical-emotional thinking to discern between the lies, disinfo and false-flags of state-propaganda machines from the pearls of wisdom and truth steadily streaming out from the 1000’s of independent sites and forums on the internet.

Here we can see how the mathematical notations play out.

So here we can see [counting from the outermost subdim] we are mostly focussed on the 4th subdim of 3d and 4d, but we lag behind on 5d [2nd & 3rd subdim] and we lag even further behind as expected on 6d where we are seeking contact with its lowest subdim.

22:12pm ….now i’ll look at the godeau effect. The theme of this presentation is the challenge of the 4th subdimension brought into especial focus because we’re now engrossed in navigating  our way thru the 4th chain on the 4th planet of our chain (earth)  considerably along the way on round-4  as our 4th and 5th root-races do our best to activate the 4d-spirilla on the first 4 planes. ….so  first i see that

My first job as a programmer was working on a 5-month project working on  barclaycard in the city of London. There followed another 11+ years as a computer programmer,  then 11+ years as a consultant/contractor mostly in the UK. I discovered the godeau effect while on one such contract  which involved working out elapsed days that a group of international  lawyers spent in different taxation zones throughout the fiscal year.

Intermittently over the course of 3 years as a hobby, i gave lectures in Israel and the UK  on the mayan 20-13 calendar.

In Israel / Palestine, i spent 7 years working  in the field of packaging and marketing super-foods including cyanobacteria, chia, coral calcium and astaxanthin.

I’ve made 3 visits inside the cheops pyramid, one including the subterranean chamber.

Over the last 18 months i’ve been researching the process of human evolution based on the giza design.

67th year of  the Aquarian age