Warks are like bubbles swimming in the  sea of matter. The ocean of matter consists of primordial matter [0-warks aka 510-warks aka 51d-warks] not yet formed into warks, ie unconscious primordial particles. 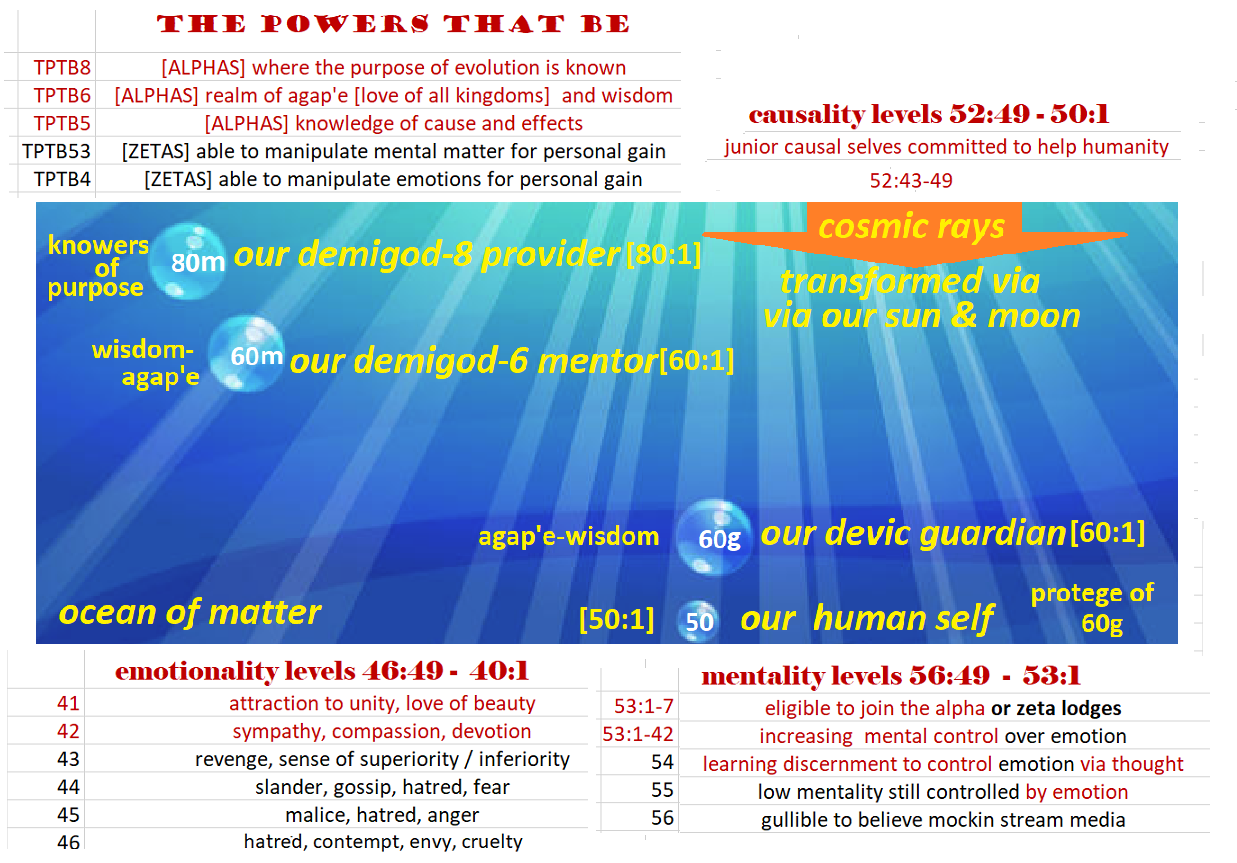 At some point millions of years ago, the first aspect Purpose decides to energize a swathe of unconscious primordial matter and transform it into several billion 1-warks aka 510-warks. The notations depend if you count from the primary dimension zero to the the outermost one, #49 but what we call 3d, the series being 0,1,2,3,…49. However, like most of us, you will probably feel humble enough and comfortable enough to start counting from our familiar 3d, like so: 3d, 4d, 5d,……51d,zero-d. Often we prefer to use the alternative and strictly numerical sequence of 30-wark, 40-wark, 50-wark,…510-wark [aka 1-wark], 0-wark.

After the transformation from primordial matter into primordial 1-wark, each of the new 1-warks can be called a 1-monad and is endowed with passive consciousness with the potential to transform into human-monad and beyond over millions of years.

These several billion 1-warks are all earmarked to become first 90-monad-warks on the 9th dimension and to find their way to the status of 50-monad which is where most of us reading this will reside.

The first task was to get each newly-formed 1-wark registered and named as one of the chosen [eventually-to-be-human] 51-dimensional monads [1-warks]– consisting of just a single 510-wark [aka 1-wark]  alone but fully primed. Next it must gather to itself another 48 1-warks and form a 50d-monad, then that 50d-monad must gather another 48 50d-warks and form a 49d-monad and so on all the way up to becoming a 3d-monad.

We have just decribed the ecvolutionary process downward, ie further and further away from the starting point. Here it becomes poised to become a mineral-monad as it gets its quantum leap into the the mineral kingdom and to start its long and arduous return journey on the upward evolutionary path.

As a mineral-monad it must do battle with 4d-emotional-elemental monads evolving downwards and when it wins that battle the time is ripe for its entry into the vegetable kingdom as a 4d-vegetable monad. [we humans play a great part in this transition as we ennoble mineral and vegetable matter with our emotions during the digestive process]

The onward struggle ensues against both 4d-elemental-monads and also some 5d-elemental-monads. Success finally signals the entry into the animal kingdom as an animal-monad. Evolution doesn’t take a rest, instead the animal monad must do battle with 5d-mental-elementals and 4d-emotional- elementals that  relentlessly pursue their own independent agenda on their own journey downwards.

For the super-elite of the top 5 highest animal species [horse, eleephant, cat, dog, monkey] , every 10 or 20 million years approximately opportunities come to enter the human kingdom as an individual soul. Assuming the total human monads are fixed, that means for every human monad moving onto the higher demi-god kingdoms slots become available for that creme de la creme of the animal kingdom to get their first taste a fully-fledged human-monad.

The animal monad that has just transformed into an human monad and ahd has brought a fully-developed character with it that has been the result of the intense interplay between  its wark-matter and the incoming cosmic and solar energies. At first, it will seem like a dire retrogression to the dis-oriented human, cos gone are the days when the monad could effortlessly contact its group soul for and support. Now in its isolationalist an insular human soul, it has to learn self-reliance in the school of hard knocks, which signifies the mostly trial-and error mode of learning.

And now with a new chakra system, discernment between good and evil must be made, so the battle of good versus evil continues as the 2 diametrically opposed directions of evolution play out: emotional elementals just want to feel all extremes in the gamut of emotions regardless of the consequences for their human host. And yes it’s so easy for us – unsuspecting human-monads to get carried away in the emotional impulse of the moment. For us the consequences of giving into that momentary impulse will typically last 48 hours until we can retun to our calm equilibrium.

Caution is advised when confronting negative emotions and thoughts for the first time. The expert entities working against human evolution can so easily manipulate the most selfish members of the human family, and unfortunately up until recently [2017] , these most selfish specimens have had near-monoplies in the higher echelons of governments and media.