The language of numbers is the international language par excellence and can avoid so many misinterpretations, cos once we can agree on how the numerical notation is defined we can have a very accurate and meaningful conversation around this theory of reality.

INS and OUTS of NUMERICAL notation – world of atoms

Remember the following applies to the subatomic world of atoms, warks and arks and not to the world of forms which is built from outside in. With our numerical notation, we need to get used to the idea of counting downwards numerically when we evolve upward thru the subdimensions.

On the left hand side, we can see the cosmos is built from warks at increasing densities from 80  > 70 … > 30. After 30wark is complete, it can revert back to the domain of wark90’s and start building the solar system out of arks in ever increasing densities from 91 > 92 up until the outermost 96.  Then the building process will build 81-86 from wark80’s and so on until it gets to the outermost layer ie building arks 31-36 out of wark30’s. So we have the logical progression from 30 wark to 31ark to 32ark and so on.

You might ask why not have the numbers evolve upward numerically all the way like we see on the right hand side of the diagram from 30 to 36 alongside 40 to 46 and 50 to 56.

That might look  pretty, we would miss the point that the lower / outermost levels are built last and therefore deserve the higher numbers. The simple fact is that we start our evolution from the outermost warks and so need to see it natural that we start at the lowest / outermost layer called 36 and work our way up to 35..34 etc alongside our journey upward from 46 to 45 etc alongside our journey from 56 to 55 etc.

For those of you not satisfied with the above continue here…
Now look at how the numbers operate on the right hand side… with this notation we would evolve upwards from 30 to 31  alongside 40 to 41 etc alongside 50 to 51 etc. Well that might look pretty but certainly it gives no honor to the building process, where the natural notation is to build 30 first then 31 and so on.. I imagine the builders would use a notation that looks like this; warks are build outward from 1 to 49, then the solar system get built as follows 43:1 to 43:2 etc, all the way out to the outermost dimension where they build 49:2 from 49:1 etc. But each to his own. We’ll keep to our notation and won’t be too concerned about how the builders notate.

Here we have to think of the building process proceding inwards [as opposed to outwards for the world of atoms that we discussed in the previous section] . Just think in terms of auras. Our etheric aura is a few centimetes beyond the skin, so that each skin cell is a replica of the etheric cell. And so it is with the auras of the earth and sun etc. 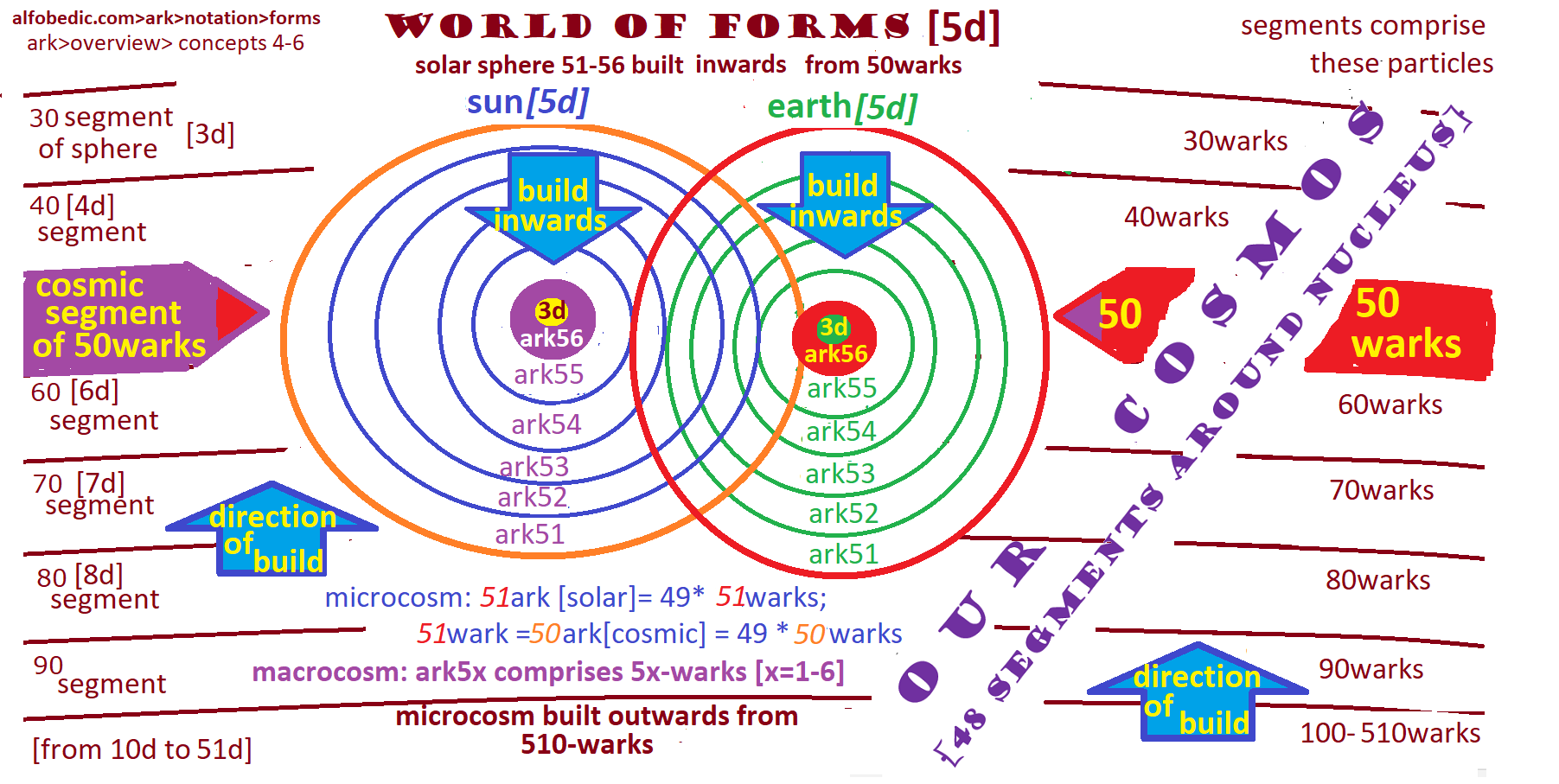 CONCEPT #5 OUR ESSENTIAL SELF = MONAD=MONAD-SELF

For Pythagoras, the world is mathematically precise and he would have laughed or cringed at the prevalent beliefs [superstitions] today that have us believe that divine grace is somehow dished out in an arbitrary fashion, administered on the whim of some divinely appointed administrator.

Here is his most sacred symbol, the tetraactys,

He encapsulates how ordered the world of human interaction really is. Our essential self [aka our human-monad] is denoted by the central dot [nucleus of 50-wark aka 50-point-one] in the central hexagonal shape and is built outwards from the center in 49 ever increasing spheres rather like the chinese dolls one inside / outside the other. The particular “chinese-doll”  that we must grapple with in our daily life is called 50.1 on dimension 50=5d and it denotes the central point of self-consciousness which holds all the our atoms in place. It is also our so-called thinker / observer who is aware of being the thinker and or observer. The rudimentary 50.1 gets connected to our brain after our 7th year of childhood and self-conscious in our 5d-mental body on the lowest rung 56, in our 4d-body also opn tghe lowest rung 46 and on the lowest 3d-etheric body 33.

The home-base of our 50.1 self is on levels 50-52 [our human soul]. Its level of self-consciousness is no greater than the the highest self-consciousness attained by any of its 3 vehicles. For most of us that equates to somewhere on the mental [56-54] and somewhere on the astral [emotional] spectrum 43. Many of us have sporadic flashes of inspiration from the realms of 52 and 42. After our first contact with our human soul which is supervised by our guardian demi-god residing on the 6d, we will be so pleased to attain more sporadic contacts and with much practice we can gain perhaps monthly contacts increasing to weekly and beyond.

our long-term goal is to make contacts so constant that we can prepare our self to take charge and so relieve our guardian deva of its duties … but for most of us that will be in the distantb future perhaps 100’s of lifetimes hence.

It’s illuminating to consider how the twin souls operate in this context. Let’s denote 50.1 [52:49] to mean our monad-self 50.1 has incarnated into a mental mody controlled by wark 52:49 that’s the outermost wark of 52ark [ see concept #7 for more info] . This is copied over to 53:1 which is the highest mental level we can attain.

beyond this point is still under construction

concept 10 the laws of evolution

CONCEPT #9 THE LAWS OF EVOLUTION